A Timeline of Will Smith and Chris Rock’s Beef Chris Rock’s jab at Jada Pinkett Smith at this year’s Oscars wasn’t the first time the comedian has joked about the famous couple. Here, a closer look at their history as both friends and frenemies.

After Pinkett Smith boycotted the 2016 Oscars ceremony for its lack of diversity, that year’s host, Rock, suggested in his opening monologue that the actress wasn’t even invited to the show in the first place. “Jada went mad,” he began. “Jada says she’s not coming. Protesting.” Then he quipped, “Jada boycotting the Oscars is like me boycotting Rihanna’s panties. I wasn’t invited!”

Rock went on to poke fun at Smith, who many had pegged as a lock to be nominated that year for his work in Concussion. “Jada’s mad her man Will was not nominated for Concussion. I get it,” Rock said. “It’s also not fair that Will was paid $20 million for Wild Wild West.”

At the time, Pinkett Smith seemingly brushed off Rock’s comments, telling paparazzi who caught up with her a few days later that “it comes with the territory.”

Still, the actress was obviously displeased with Rock’s latest remarks, which touched upon a sensitive subject, after she revealed her battle with alopecia last year. After Rock quipped that he “can’t wait” to see Pinkett Smith in “G.I. Jane 2,” the actress was caught on camera with a stern look on her face, after which Will Smith leapt onstage to hit Rock.

Though Smith has yet to directly address his scuffle with Rock on stage at Sunday’s Oscars, he did say that “love will make you do crazy things” in his Oscars acceptance speech. “I know to do what we do, you gotta be able to take abuse, have people talk crazy about you,” he said. “In this business you gotta be able to have people disrespecting you and you gotta smile and pretend like that’s OK.”

It hasn’t always been contentious between the acting couple and Rock. The three have attended numerous events and award shows together without any drama in the past, and they were even spotted sitting courtside together at an NBA game back in 2012. 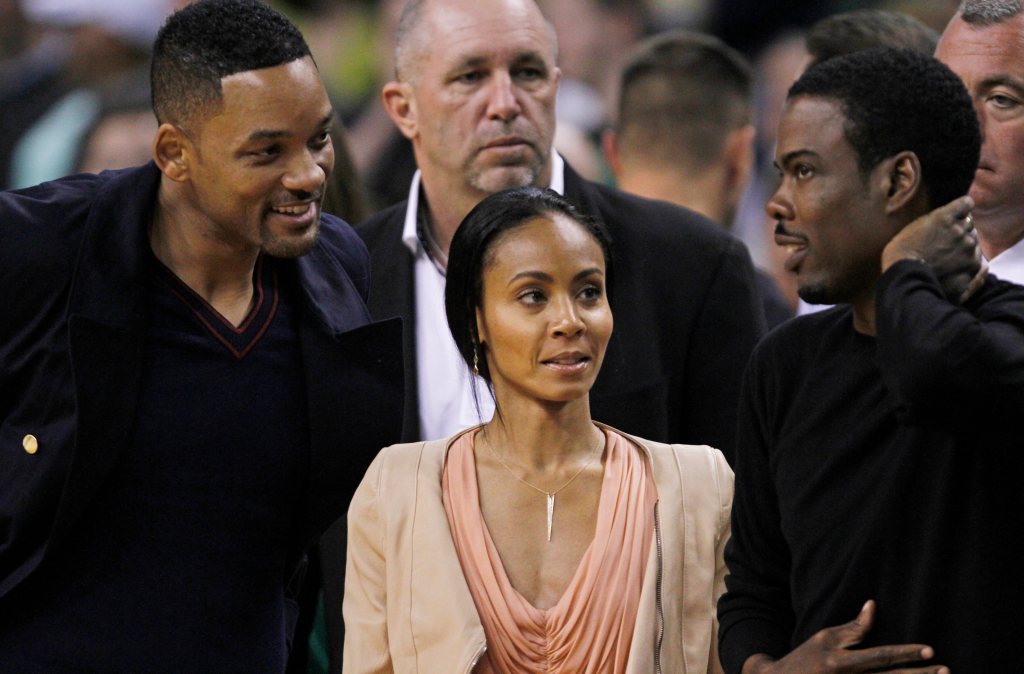 From left: Smith, Pinkett Smith, and Rock during Game 5 of the Eastern Conference championship series in Boston in 2012.

Smith and Rock go back even further, having both appeared in the 1999 mockumentary, Torrance Rises, directed by Spike Jonze. And Rock even appeared in a Season Six episode of The Fresh Prince of Bel-Air, doubling up as a famous actor named Maurice Perry — and his sister Jasmine.

It’s not clear if the beef between the Smiths and Rock started after Rock’s 2016 Oscars monologue, or if other events may have precipitated the confrontation at this year’s Academy Awards. Still, Smith cited Richard Williams’ famous defense of his family on stage when accepting his Best Actor trophy for King Richard, saying “I’m being called on in my life to love people and to protect people.” Could Rock have poked the bear a little too far when it came to Will and Jada’s relationship?

By Hollywood standards, the Smiths have had a relatively stable relationship since they were married in 1997, though their marriage has not been without a few bumps in the road. In his memoir, Will, Smith writes that things first came to a head in 2011 when he threw an extravagant birthday party for Jada that included a surprise performance from Mary J. Blige but also a self-commissioned documentary that traced his wife’s legacy back to slavery. Pinkett Smith asked him to cancel the party, he writes, calling it “the most disgusting display of ego I have ever seen in my life.”

They didn’t speak for days after the event and Smith writes that the couple soon decided to take a temporary break. “Our marriage wasn’t working,” Smith recalls. “We could no longer pretend. We were both miserable and clearly something had to change.”

The couple would eventually get back together — in large part due to their children Willow and Jaden, Smith says — though it was far from a romantic reunion. Tabloids soon began running stories on the Smith’s “unconventional” marriage, with headlines alleging everything from an open relationship to cheating and secret affairs.

In 2020, singer August Alsina claimed that he and Pinkett Smith had an affair in 2016, saying that it was with Will’s full knowledge and permission. Jada and Will would later address the rumors on an episode of Pinkett Smith’s Red Table Talk, with Jada admitting that she and Alsina had developed a “physical relationship” but that she had been separated from Will during that time.

The actress revealed that she quickly got back together again with Smith, saying that the two began “healing” their relationship and have been for the better ever since. “We did everything we could to get away from each other, only to realize that’s not possible,” she said.

The work to get their relationship to where it’s at now may have been on Smith’s mind when he took the stage to confront Rock on Sunday night. In an Instagram post Smith posted just before the ceremony, the actor wrote that “Me ‘n @jadapinkettsmith got all dressed up to choose chaos.” He couldn’t have predicted it any better.

Tags:
Previous Article
NCT DREAM Makes A Roaring Return To The Spotlight With ‘Glitch Mode’
Next Article
Five Tracks By Jackson Wang You Must Know