Accept Reality: We Now Live in a World Where the Grammys Are Awesome

Recapping a night of music, positivity, and whatever the hell was going on with “Peaches” Oh, you sweet innocent little lamb — you’re mad about who won Album of the Year at the Grammys. Never change. Here’s the thing: Can you name the last six Album of the Year winners off the top of your head, without looking it up? No, you can’t, because you don’t really care about this award — you just pretend once a year. So it’s a waste of your rage rent to squander it on an award you won’t remember by Tuesday. The Grammys are never about who wins. It’s always about the music.

And Grammy Night 2022 had a slew of stellar music moments. Last year, the pandemic forced the show to focus entirely on live performances. Result: The best Grammys ever. This year, they wisely decided to keep it that way. So it was one music peak after another, starring Silk Sonic, Billie Eilish, Lil Nas X with Jack Harlow, BTS, Olivia Rodrigo, Lady Gaga, and others. “Don’t even think about it as an awards show,” host Trevor Noah said. “This is a concert where we’re giving out awards.”

When Jon Batiste won Album of the Year for We Are, in a shocker upset, he said, “Be you. That’s it. I love you even if I don’t know you.” That sums up the tone of Grammy Night 2022. The stars gave extreme positivity and emotional poise, cheering on one another. This had to be the most attitude-free Grammys ever. Whether that was post-pandemic shell-shock, or a reaction against last week’s disastrous Oscars, it was a celebration of live music that felt truly uplifting. I know you don’t like this idea, and neither do I, but we need to accept reality: We now live in a world where the Grammys are awesome.

Joni, people. Joni Mitchell Herself showed up at the damn Grammys — in the flesh, even smiling, hanging with Brandi Carlile and Bonnie Raitt. Strong and somewhat sincere, right? After what she’s been through, it was a rush to see her make the scene in her chic red cap. It hit you in the soul a bit to think, “Wow, Joni is there right this moment, wondering what the fuck is up with Bieber.”

Silk Sonic were the night’s spirit angels, totally in character — Bruno Mars and Anderson .Paak wore superfly Soul Train suits and celebrated every win with a slinky victory dance. They kicked off the show doing “777,” from an allegedly retro album that sounds even better now than when they dropped it last year. When “Leave the Door Open” won Song of the Year, Mars told the fans, “Because of you guys, me and Andy are gonna be singing this song forever.” 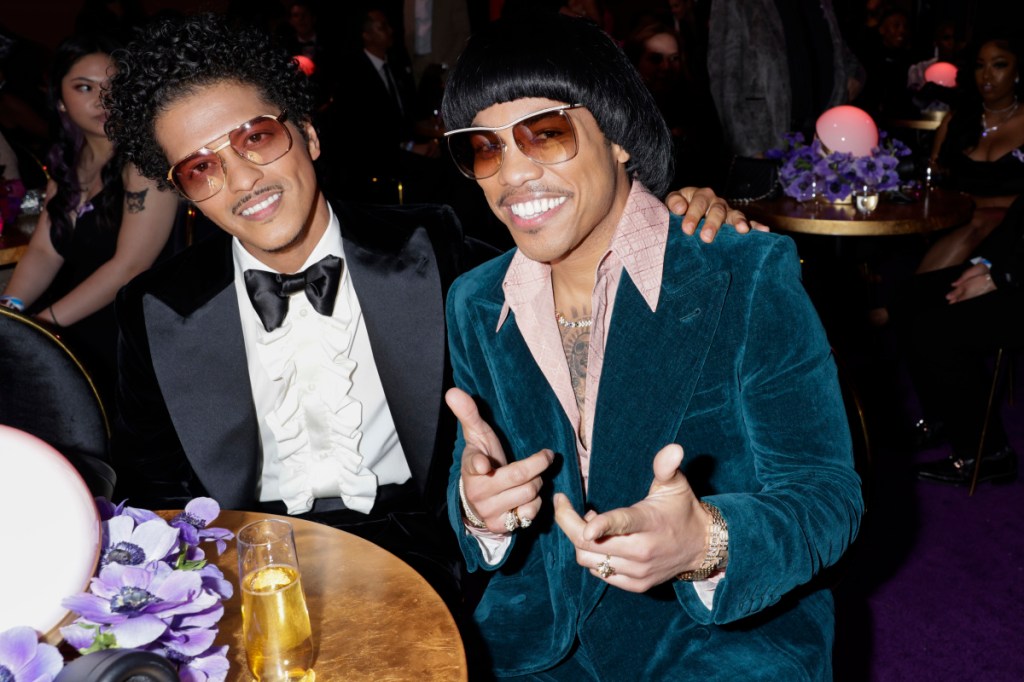 Billie Eilish gave the night’s most powerful performance, wailing “Happier Than Ever” on a rainy rooftop with Finneas wilding out on guitar. It was a dramatic delivery for a devastating song: real rock-star behavior. It got one of the night’s loudest ovations: Olivia Rodrigo jumped up to yell “Wow!”

Eilish also spent the night wearing a Taylor Hawkins shirt, a touching tribute to the beloved Foo Fighters drummer, after his still-unbelievable death. Billie’s open-hearted fandom kept lighting up the room, as she became a one-woman cheerleading squad for her peers. One of the night’s sweetest moments: Batiste came over to give her a hug, on his way to the stage to accept Album of the Year. Billie gave him a literal pat on the back, even though she’d just lost.

BTS made history with “Butter,” their first true Grammy showcase, in suave Sinatra-worthy suits. For a septet who conquered the world by being themselves, without making any concessions to American expectations, they’re really too big for the Grammys, but they made the night. It began with V whispering into Olivia Rodrigo’s ear flirtatiously. (What did he saaay?) Then they rushed the stage in a whirl of James Bond superspy swagger. BTS knew this was their big Grammys moment — last year they had to beam in from Seoul, South Korea, and in previous years they stole the show despite only a few seconds of airtime. But tonight, their confidence burst through the roof, and so did “Butter,” one of the night’s undeniable triumphs.

Lil Nas X glammed out with three costume changes in three minutes. When he shimmied out in a black cape, every fan figured that shit would be on the floor in seconds. But he waited a full minute before his sensual crop-top reveal. He switched into a Welcome to the Black Parade-era My Chemical Romance fit for “Industry Baby,” double-teaming with Jack Harlow. 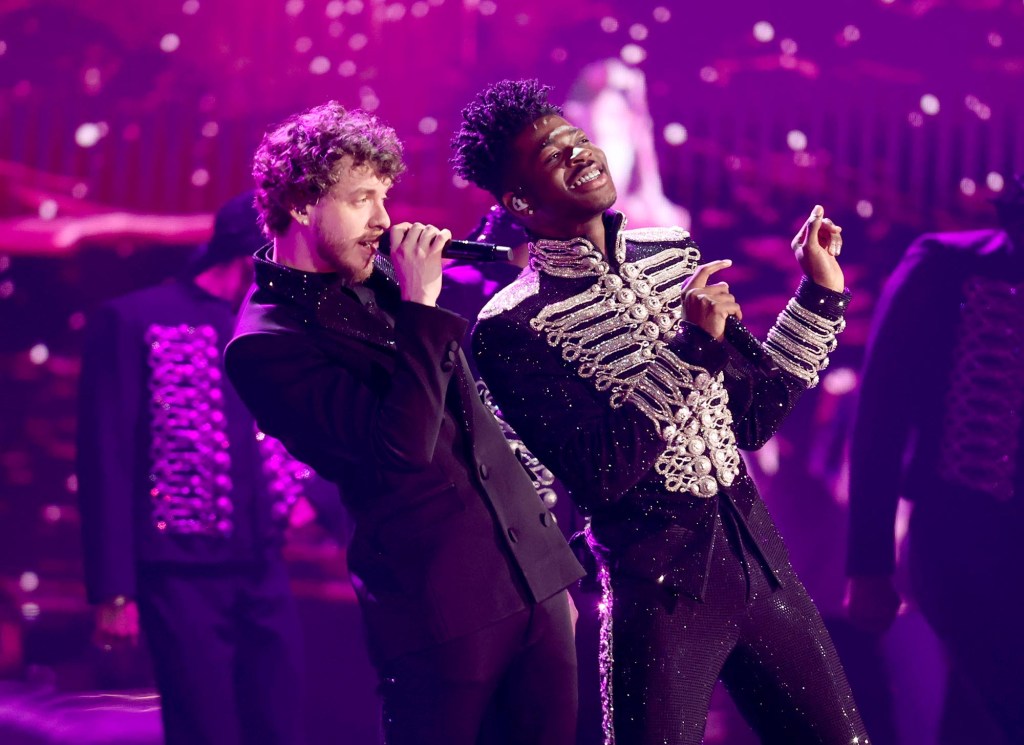 Rodrigo’s “Drivers License” might seem like it’s been part of our overfeeling forever, but this was her first Grammys, and she sang it in a damn Mercedes. Some of us were hoping she might do a “Deja Vu” debut with Billy Joel, but I guess he decided to leave a tender moment alone. Olivia won Best New Artist, and touchingly got welcomed to the club by previous winners Dua Lipa and Megan Thee Stallion. Those two had quite a fashion moment, twirling with Donatella Versace.

Jazmine Sullivan won Best R&B Album for her modern classic Heaux Tales, and gave an unforgettable speech, saying, “Shout out to all Black women who are just living their lives and being beautiful.” Brandi Carlile did a fantastic “Right on Time,” nailing those impossible high notes. Nas, looking and sounding fresh to death, served old-school hip-hop bangers with a big band. He proved, as always, the world is his. One of the night’s coolest reaction shots: Lil Nas X bobbing his head to Nas.

Lady Gaga did a jazzy Cole Porter tribute to her duet partner Tony Bennett, whose health didn’t permit him to join. But the 95-year-old Tony gave a heartfelt video salute to “my friend Lady Gaga,” as she called out, “I love you, Tony! We miss you!” Gaga’s giant-hearted finesse with the old folks has been one of very few things to bring joy in the past week — from bonding with Liza Minnelli to singing for Tony. Gaga’s a genius at so many things, but it’s a revelation to see how powerful her kindness is.

When SZA and Doja Cat won for “Kiss Me More,” Doja almost missed the moment — she was in the bathroom. After racing to the podium, she confessed, “I have never taken such a fast piss in my life.” Then she made a movingly tearful speech. SZA is more glam on crutches than most stars are on stilettos. When the train of SZA’s dress got tangled, Lady Gaga carried it to help her up the stairs — queens supporting queens. 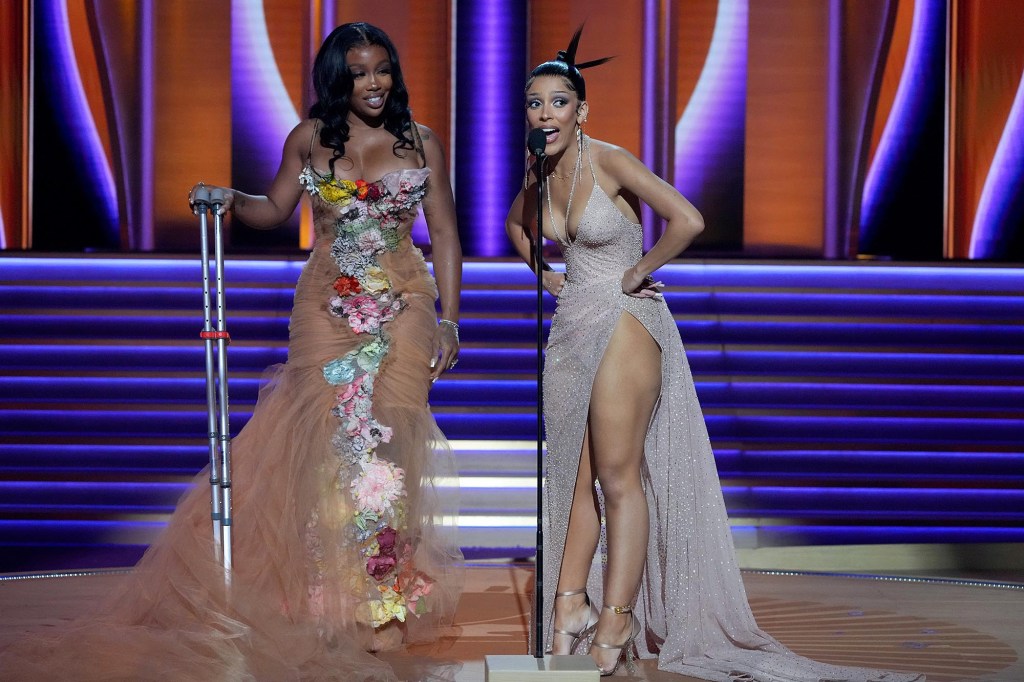 In a decision that was definitely a decision, Justin Bieber turned “Peaches” into a solemn piano ballad, singing the words like they were poetry. It was bizarre to see the Bieb get so hyper-emotional over his fruit-and-weed supply-chain issues, especially when the censors kept bleeping him. It evoked the 2011 VMAs, where he gave the same treatment to “Pray.” (That was the same VMAs where he came with Selena Gomez and brought a snake on their date, a moment that will keep traumatizing me unto the grave.)

Ukrainian President Volodymyr Zelensky made a video appearance to talk about the devastation caused by the war, while John Legend sang “Free” along with Ukrainian singer Mika Newton and poet Lyuba Yakimchuk. H.E.R. jammed with Travis Barker — a perfect storm of award-show regulars. (Where the hell was Common?) Jimmy Jam and Terry Lewis brought the Eighties-keytar realness. Lenny Kravitz — that guy’s always had it, always will. J Balvin rocked “Qué Más Pues” with Argentinian Maria Becerra. Baby Keem won Best Rap Performance for “Family Ties,” with Kendrick Lamar. Avril Lavigne presented, a perfect occasion for a reminder that “What the Hell” from 2012 is not just her best song, but a landmark of pop genius. It just is.

The In Memoriam loop was a medley tribute to Stephen Sondheim, who barely got mentioned last week at the Oscars. (In case you forgot, they showed his face onscreen while singing “Spirit in the Sky.” That really happened.) It was a sad reminder of how many legends we’ve lost in the past year. It was poignant to see Biz Markie, gone way too soon, the Diabolical One, the embodiment of music’s wit and warmth. Now and forever, nobody beats the Biz.