At Arkansas’ TempleLive, singer Travis McCready performed to a crowd in masks in the country’s first concert of the social-distancing era The laid-back nature of the performance felt like a house show in a buddy’s living room. Photo: September Dawn Bottoms for Rolling Stone

Following weeks of contention between the state of Arkansas and Fort Smith music venue TempleLive over plans to stage the country’s first pandemic concert, the art deco theater opened its doors Monday night to host Travis McCready, the singer of blues-rock band Bishop Gunn. It was America’s first concert since shelter-at-home policies began in most states in March and — despite threats of police intervention, the temporary revocation of the venue’s liquor license, and a rescheduled show date — the show went off without a hitch.

Still, it was far from what many might consider satisfying.

More than 200 fans from the local area and beyond showed up to support live music despite a series of safety measures that reduced audience capacity by 80 percent and required concertgoers to wear face masks while inside the venue.

Nancy Rainey, a local fan who has been “jonesing for some live music,” says she wrote a letter to Arkansas’ Gov. Asa Hutchinson on Thursday in support of TempleLive, echoing one of the organizers’ main arguments with the state — a policy that allowed churches to remain open while other places people congregate were closed.

“If the churches can gather without any restrictions and the Temple is following the CDC recommendations for socially distancing and the masks, then why not?” she said in the lobby prior to the performance. “People can exercise personal responsibility and be out in public.”

Rainey and other attendees were greeted at the door by TempleLive staff, who checked the temperature of each person with an infrared thermometer. Once inside, stickers and tape placed on the floor directed fans where to queue at a six-foot distance for everything from merchandise to food and beverages. Another staffer policed the bathroom lines, allowing no more than 10 people in at a time.

On the surface, the concert had all the makings of a typical rock & roll show. Stage lights set the mood. The audience clapped along, with some even dancing in their “fan pod” seats (tickets were sold in blocks to keep groups six feet apart). But when the bank of floodlights at the front of the stage illuminated a nearly empty 1,100-seat theater during McCready’s set, the reality of the situation was clear. The first socially-distanced concert in the U.S. felt more like a dress rehearsal than a typical concert experience.

“This is the first step forward,” Lance Beatty, president of the Beatty Capital Group that owns TempleLive, told Rolling Stone.

Traffic was light. Pairs of bartenders at two stations — one to handle the transaction and one to fill the order — stood idle after the show began. During the intermission between opener Lauren Brown and McCready, one bartender, in gloves, leaned her forearms against the bar while she scrolled on her phone.

Although they didn’t disclose the extent of the loss for last night’s event, Beatty and Mike Brown, vice president of TempleLive, both flatly asserted this type of show is not financially sustainable.

“This impacts the artists, the venue owners, ticket sales, all the way down the line,” Beatty said. “I don’t care if you’re Kenny Chesney. If I’m a concert promoter, I can’t pay the same price [for reduced capacity].

Still, music fans proved that they’ll travel and make sacrifices to watch their favorite artists perform. A trio of fans, all wearing Bishop Gunn T-shirts, drove to Fort Smith from three different parts of the state to see McCready. They first saw him open for Southern rockers Blackberry Smoke at TempleLive in 2017, when he was in Bishop Gunn, and have traveled as far as Houston to see the band when they opened for the Rolling Stones in 2019.

“It’s like we’re a family,” said Donna Mason, who made the 90-minute trek from Bentonville, Arkansas. “When you go to a Bishop Gunn concert, all the people know each other.” 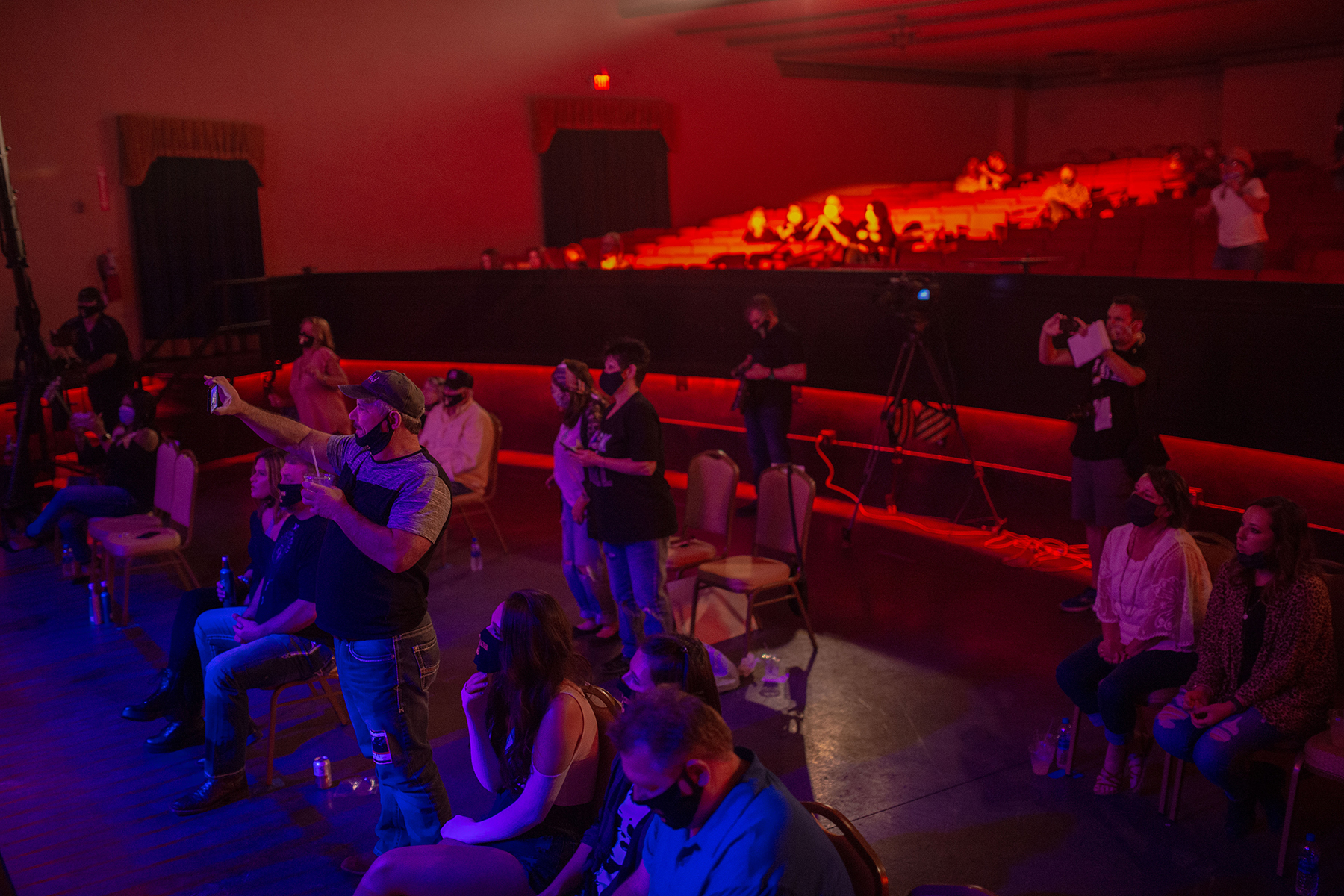 The ‘crowd’ at the first indoor concert in America during the Covid-19 pandemic. Photo: September Dawn Bottoms for Rolling Stone

Around 9 p.m., McCready swaggered from aside the stage to applause and shouts of “You’re making history!” from fans. His Great Dane, Van Gogh, who he said has been by his side constantly for the past few months, followed and roamed the stage while McCready picked the chords to “Riders,” a song about perseverance he recorded with his former band.

“I can’t see anybody, so it looks like a full house to me,” he said to scattered applause. Behind him, Van Gogh nosed a water bottle around the back of the stage, then finally got its mouth around it and dropped it at McCready’s feet, where he stayed for the next song before wandering off.

It was quiet between songs as McCready tuned his guitar. A toddler cried out. A man introduced to the audience as “Mr. Johnny” glided around the stage on a hoverboard wearing shorts, a blazer, and a fedora, puffing from a vape pen.

But by his fourth song, a paint-peeling solo cover of Audioslave’s “I Am the Highway,” performed on the third anniversary of singer Chris Cornell’s death, McCready had overcome the awkward vibe with the thing that enticed stir-crazy people to leave their homes in the first place — his voice. By the end, the gig took on the intimacy and casualness of a living-room show at your buddy’s house.

While the concert is history, the battle between the state of Arkansas and TempleLive may not be over. Beatty still sees “significant constitutional issues” such as freedom of speech and the right to assemble in how the state maneuvered to prevent the concert. He says he’s weighing legal action.

“As far as the show,” he said, “I think it means hope to a lot of people. They want that part of their lives back. The constitutional issues, we’ll figure out later. Fans wait in line to have their temperatures checked before entering the TempleLive venue in Fort Smith, Arkansas. Photo: September Dawn Bottoms for Rolling Stone Arrows taped to the floor and curtains kept fans moving in one direction. Photo: September Dawn Bottoms for Rolling Stone Sections of seats were taped off to enforce six feet of social distancing. Photo: September Dawn Bottoms for Rolling Stone Twenty chairs were set up and spaced out in the pit section in front of the stage. Photo: September Dawn Bottoms for Rolling Stone Travis McCready performed an acoustic set of covers and songs by his band Bishop Gunn for an audience limited to 229 fans. Photo: September Dawn Bottoms for Rolling Stone The laid-back nature of the performance felt like a house show in a buddy’s living room. Photo: September Dawn Bottoms for Rolling Stone A lone fan in a mask waits for Travis McCready to take the stage. Photo: September Dawn Bottoms for Rolling Stone Travis McCready was backed up by three other musicians, including his bandmate in Bishop Gunn, drummer Burne Sharp. Photo: September Dawn Bottoms for Rolling Stone Workers in gloves and masks ready the theater for the concert. Photo: September Dawn Bottoms for Rolling Stone