‘Bullet Train’ Would Be Better If They’d Just Named It ‘Kill Brad, Vol. 1’ Let us now praise Brad Pitt. Or rather, the whole repertory company of Brad Pitts — the leading man who chased kooky character-actor roles, the matinee idol who stopped worrying and learned to love movie stardom, the wild-card outlier, the endlessly snacking comic relief, the grungy sex symbol, the All-American Adonis next door, the A-list veteran who lets his supernova aura do the talking. You get every single one of them in Bullet Train, the ballistics-and-whistles blockbuster adaptation of Kotaro Isaka’s 2010 crime novel about a commuter train filled with killers; there’s a lot of Brad for your buck here. But it’s that last guy, the just-shy-of-sixtysomething Hollywood elder, who keeps edging his way into this particular spotlight. Peruse the past seven years’ worth of acting work: neo-vanity projects (By the Sea) and old-school star vehicles (Allied), the lows (War Machine) and the nosebleed highs (Ad Astra and Once Upon a Time in Hollywood, in the same year!). What connects them is a performer who’s figured out exactly how to use an autumnal presence to his advantage without pandering or playing things up. It’s been three decades since a walking, talking abs-delivery-service sauntered into Thelma and Louise. The man has not just aged well, he’s aged perfectly for the screen.

And Pitt can still carry the weight of a movie on those protein-shake shoulders, which is good, because Bullet Train needs a lot of carrying. A candy-colored concoction of carnage with a substantial body count and even higher empty-calorie count, director David Leitch and screenwriter Zak Olkewicz’s attempt to weave the book’s intersecting narratives into a singular piece of pulp fiction has a tendency to jump the rails at regular intervals. At the center of it all — in more ways than one — is Ladybug, a professional killer coming off a personal funk. He’s had some bad luck on a few jobs, which has given him a bit of a Job complex; he’s convinced some higher power has cursed him for reasons unknown. Thanks to some time off and therapy, however, he’s ready to roll again. His handler, Maria, has started him off on something simple. Get on the bullet train heading out of Tokyo, the disembodied voice on his phone tells him. Grab a briefcase — it’s got a sticker on the handle, you can’t miss it. Get off at the next stop. What could go wrong?

For starters, there are the two men transporting the item. They’re Lemon (Brian Tyree Henry) and Tangerine (Aaron Taylor-Johnson), a pair of idiosyncratic British hit men whose reputation precedes them. The former adheres to a philosophy based on Thomas the Tank Engine, complete with archetype breakdowns and sticker sheets. The latter is just your run-of-the-mill asshole. This bickering duo had been hired to retrieve the kidnapped son (Logan Lerman) of a notorious, feared Russian gangster known as “White Death.” That coveted case contains his ransom money. One massacre of either 16 or 17 people later — the exact number is disputed, and thus requires an elaborate flashback counting off murders to settle the argument — Lemon and Tangerine leave with both the manchild and the money. They must hand over both to Dad’s cronies at one of the stops. Except someone’s taken the case. Worse, when the citrus-y pair return to their seats after searching for it, there’s a corpse waiting for them.

Also See  The Best Summer Songs of All Time

Plus there’s Kimura (Warrior‘s Andrew Koji), a yakuza’s son whose own young boy is in the hospital after being pushed off a roof. He’s been tipped off the bastard who did the deed is on the train, which turns out to be an ambush by the Prince (Joey King), a snarky teen with her own respective plan for payback. And there’s the Wolf (Bad Bunny), a young man decked out in gauche cartel-chic couture who, once upon a time, lost his bride on a very bloody wedding day and has vengeance on his mind, too. And the news keeps reporting the theft of a venomous viper from the zoo, which might be aboard as well — snakes on a train! — and people keep popping up poisoned, blood streaming from their eyes, and also another mythical assassin named the Hornet could be lurking around as well, and the closer everyone gets to their final destination, the more likely that Mr. White Death will make a personal appearance, which tends to end very badly….

Most of this comes straight from the source material, minus a few gender flips and bonus plot additions, and if you’ve read Isaka’s recently translated page-turner, you’ll recognize enough of the novel’s tone to make it a faithful page-to-screen transition. That’s both a feature and a bug: The book itself brims filled with neurotic psychotics and Pop Culture debris, kooky killers with offbeat nicknames and more spilled Type O than a blood bank in a Mack Sennett two-reeler. That Thomas the Tank obsession? It’s part of the original text, next to quirky musings about Virginia Woolf and German silent cinema. The book was first published in 2010, but the dream of the Nineties is alive of Bullet Train, specifically the fever dreams of one American writer-director  in particular from that decade.

So it wasn’t surprising when Isaka said he wasn’t bothered by his Japanese novel getting the full Hollywood treatment, because the influence of Hollywood feels far stronger in his book than anything culturally related to Japan, Shinkansen setting or not. There’s a strong sense that what you’re really watching is Kill Bill, Quentin Tarantino’s valentine to psychotronic J-cinema, get translated from English to Japanese then back to English. All of this sound and fury and Caro syrup and irony, slathered in Kawaii-cutesiness, conjures up an odd déjà vu effect — it’s like being in an echo chamber reverberating someone’s else’s second-generation love and theft right back at you, with diminishing returns. The snake-eating-its-own-tale vibe is strong with this one. They could have just been honest and called it Kill Brad, Vol. 1. 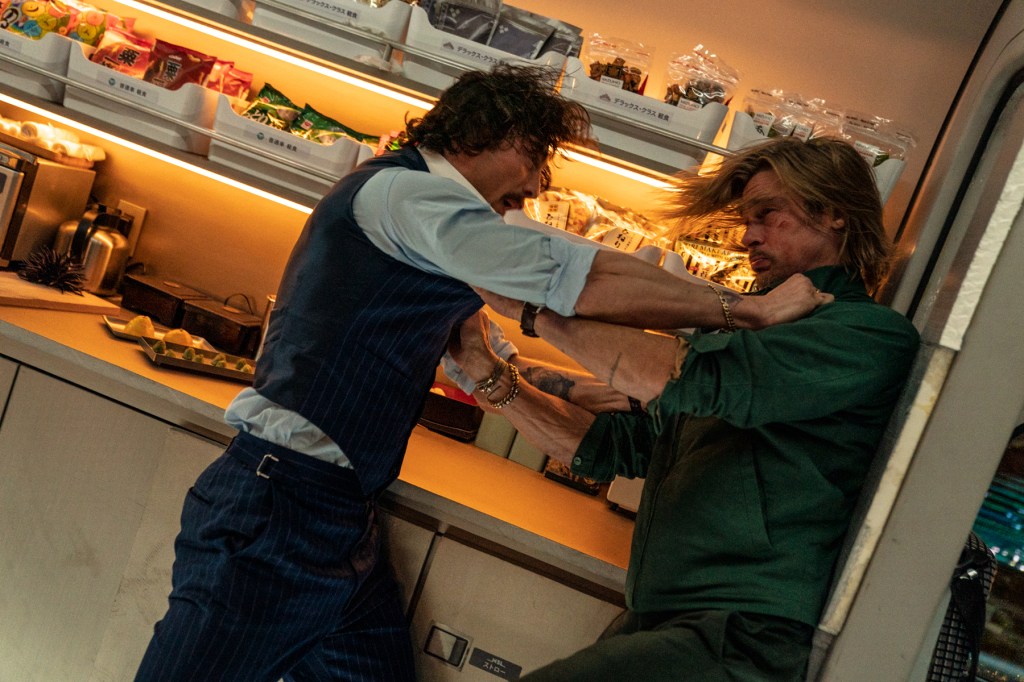 All of which might have been fine if Bullet Train had delivered the goods, the thrills and chills and steroidal summer-flick highs you expect from a dark comedy set on an all-star murder express. Leitch has logged in years as an action co-ordinator and stunt man — he was Pitt’s double on Fight Club — before co-creating John Wick, still the greatest action franchise of the past decade. He was the guy who put Charlize Theron through her paces in Atomic Blonde; he also made Deadpool 2, and you can feel that movie’s sniggering nihilism coursing through this film’s veins as well. And while Leitch clearly knows a million different recipes for mayhem, the delirium itself never gets up to its proper speed. Fight sequences and CGI-heavy ballyhoo fizzles to an end before they even begin. Any expectations that Pitt will get the full gun fu/UFC-fighter makeover should be left at the door — a “Brad Wick” joint this ain’t. The overall sense is to simply keep everything else moving so zippity-quick that people will mistake the manic pacing for actual Grand Guignol fun, though a train going nowhere at 285 kilometers per hour is still going nowhere, just faster than usual.

As for the rest of the cast, some deal with their accents and action scenes better than others. Hopefully, Brian Tyree Henry got hazard pay for rocking his atomic-blonde ‘do, and you can feel him and Taylor-Johnson working extra hard to give their curdled-cool banter some sort of electro-shock treatment. Zazie Beetz is forced to end all of her lines with an exclamatory “bitch,” and she deserves better. Michael Shannon shows up late in the game to remind us that we do not deserve him — nobody does more with the less that is the movie’s sketch of a glaring, unhinged eccentric, a.k.a. his sweet spot. It’s not a spoiler to say that Sandra Bullock plays Ladybug’s boss, given she’s in the trailers. A few other famous-face cameos are best left unrevealed, and you’ll leave Bullet Train convinced there’s an informal network of a half-dozen celebrities one phone call away from popping into each other’s movies at a moment’s notice.

But back to that name above the title for a second. It takes a certain type of actor to transcend mediocre-to-massively-disappointing material. It takes a truly rare movie star to not only rise above a mess, however, but convince you that his or her mere presence is what’s keeping it from turning into a complete trainwreck. The amount of casual charisma and commitment Pitt is bringing to this is the one thing that actually differentiates this from being just another stylishly lit, stupid-hip snarkfest. It’s impossible to overestimate how unwatchable this might have been without him injecting a sense of Pittitude into every scene he’s in — whether it’s tossing off Ladybug’s post-therapy platitudes (“Hurt people hurt people”), or gracefully moving through some uncharacteristically clunky set pieces, or simply displaying a WTF-dude? bewilderment when a case of mistaken identity almost gets him gutted. The sheer pleasure of watching him do what he does best comes close to balancing out you suffering through everything else. At every stop along the line, you’ll want to get off. He’s the only thing keeping you on til the bitter end of the line.

Tags:
Previous Article
Missing Texts, Disney’s Threats and Marilyn Manson: Five Bombshells From Unsealed Johnny Depp and Amber Heard Docs
Next Article
How to Let Someone Know You Like Them — Tips We’re Stealing From the Film ‘Anything’s Possible’