Seeger, who mentored the likes of Bob Dylan and Don McLean in the Fifties and Sixties, passed away in New York 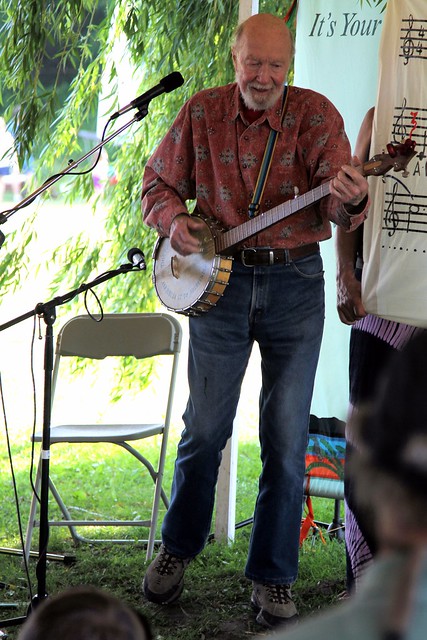 Pete Seeger, one of the leading figures behind American folk revival in the Sixties, passed away in New York today. Seeger lived in Beacon, New York and his death was confirmed by his grandson, Kitama Cahill Jackson, who said he died of natural causes at New York-Presbyterian Hospital.

Seeger, born in 1919, was best known for songs such as “Turn, Turn, Turn,” “Where Have All The Flowers Gone?” and the African-American Civil Rights movement protest anthem, “We Shall Overcome.” The folk artist went on to mentor upcoming folk artists in the Fifties and Sixties, including Bob Dylan, Don McLean and Bernice Johnson Reagon. Seeger was also an activist protesting the Vietnam War, championing civil rights and environmentalism. “My job,” he said in 2009, “is to show folks there’s a lot of good music in this world, and if used right it may help to save the planet.”

Seeger, who was inspired by folk singer-songwriter Woody Guthrie, in turn influenced Bruce Springsteen. In 2006, Springsteen released We Shall Overcome: The Seeger Sessions, interpreting 13 Seeger songs. Although Seeger has recorded over a 100 albums, he stayed away from the idea of being a star. Originally, he wanted to be a journalist; Seeger founded a radical newspaper and joined the Young Communist League while he was studying at Harvard in 1936. He dropped out of college and moved to New York City to pursue music, but kept his communist allegiances strong throughout his life. Seeger said in 1995, “I still call myself a communist, because communism is no more what Russia made of it than Christianity is what the churches make of it.” Seeger released his first album only in 1940, performing antifascist songs with the group Almanac Singers. The group got a prime-time national radio spot during World War II, but lost momentum when they were targeted by the FBI for their earlier anti-war songs. Seeger’s next band was folk band the Weavers, who rose to national fame in 1950 for songs such as “Kisses Sweeter Than Wine” and cover version of Woody Guthrie’s “So Long (It’s Been Good to Know Yuh).” The Weavers sold an estimated four million singles and albums between 1950 and 1951, before Seeger was once again targeted by the FBI and the House Un-American Activities Committee for his communist leanings [Seeger had, by then, quit the communist party] and the Weavers’s popularity suffered.

Seeger was also one of the founders of the Newport Folk Festival, which has hosted everyone from Bob Dylan to Linda Ronstadt, Allman Brothers Band, Levon Helm and Damian Marley, among others.